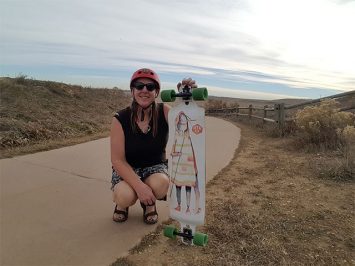 Hello, my name is Gretchen, and I am a professional certified electrologist here in Longmont, Colorado.

Waking up every morning knowing that hair removal is the first thing I must do before I face the outside world was so daunting. The thought of running your hands let alone someone elses hands across the surface of your face is a dreadful thought. After so many years of this I finally had enough, it was time to permanently remove this awful hair from my face. Of course I wanted this done quickly, so laser hair removal seemed like the way to go. It turns out that I should have done some research before I started laser. I found out the hard way that not all laser shops/technicians are honest in what they can actually do for you.

After spending $1,000 and seeing no results, my heart dropped a little until I found out about electrolysis. I voiced my concerns to the laser tech and she recommended an electrologist who is a 20 year veteran of her trade. It felt like a new hope had arisen and I would be well on my way to being hair free… no such luck. It turns out that not all electrologist’s are created equal. After 50 hours, at $80 an hour ($4,000), my results were minimal and I gave up. $5,000 for practically nothing.

My current occupation was coming to an end and I needed something new. I thought about how much money I spent on hair removal and I thought that with the proper training I could be a skilled electrologist. I thought I could actually take peoples money and give them what they want with nothing but transparency and stellar results. I found a local school that taught aesthetics and electrology and after listening to the owner/instructor’s pitch I bought the course. After one week of sitting in that class I knew I had thrown away another $5,000.

It finally dawned on me how bad the hair removal industry really is and I needed to do something. While sitting in that classroom I was surfing the web trying to find someone to help me, and I finally found someone. Not only did I find someone, I found a group of world class electrologists who took me under their wings and taught me how to be a modern electrologist. So here I am today, after hemorrhaging thousands of dollars in an uphill battle, I’m doing exactly what I said I would do: taking people’s money and giving them exactly what they want with transparency and stellar results.